Man in the Wilderness – Pt-8

It was their intention all along to use a limited power nuclear device to take out all power, government response to the danger and disrupt river and roadway traffic. A pretty ingenious idea and then they rolled into Idaho via roads leading to Canada. You barely avoided the onslaught when you made it into outskirts of the Nez Perce Reservation lands.

You saw all you needed to see from here now you wanted to sneak into the southern part of town if you could without being detected. You scanned the rooftops for sentries and found none you had a bad feeling about anyone who had survived the blast and the invasion of foreign troops.

Your friends and you used to gather in your friend Dave’s apartment with cold beer and large pizza’s ordered from Domino’s to watch Prepper’s on Wednesday on his 66 inch television. You also watched documentaries on YouTube.com as his television was linked to his internet as a monitor and one night a show about FEMA concentration camps across America puckered up everyone’s ass in the bunch. It talked about the New World Order and their banking cabal and after all this was YouTube and there was lots of bullshit but this had video footage showing locations and went on for about an hour. 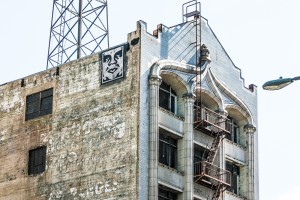 You wondered if that was happening right here in Idaho?

You crossed between buildings, over fences along Tammany Creek Road where normally barking dogs and children would have been in the back yards in the housing areas to the north now completely abandoned and silent.

It took you 30 minutes but you made your way to the woods just south of the subdivision and traffic was moving along Barr Road but only intermittently and all military vehicles going north likely to Interstates12 East or 95 northbound.

You crossed over Barr Road to a group of office buildings. The parking lot normally packed with cars was empty save for ones that had been abandoned and stripped of wheels and likely anything of use by looters.

The office building was abandoned windows blown out by the concussion of the blast, debris scattered for hundreds of feet in every direction. You had all the items you could carry as it was and would return another day moving closer to town to see what was actually going on and who it was you would someday be forced to deal with.

Getting back before dark wasn’t much of a problem. The route back was direct and darkness was setting within an hour as you made your way to your old camp in the cave where you kept water and supplies cached.

You sat your lootings on the cave floor still covered in the tarp it was cool and dry. You lay your pack down and decided to let fatigue overtake you and lay down and you were instantly asleep.

You awoke with a start… 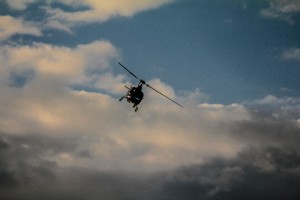 You crawled outside to see two huge dual propellers flying past the sound on the ground was deafening. Slung below the belly of each were huge wooden crates suspended by straps and cables. They were headed toward town.

Your curiosity was peaked to know what was in those crates and would it be your next mission to town to find out?

The next few days passed quickly and you assessed your position knowing one successful trip was pure luck and that you had been lucky to walk into town and escape detection. Now your thoughts of getting close to the airport to see what exactly was going on didn’t make a lot of sense as you were just one person with no intelligence on what was going on and the invaders numbered in the hundreds and would shoot to kill.

You had a Grundig M400 AM/FM/SW radio buried in a side pocket you had forgotten about and pulled it out and pulling the antenna out you slowly turned the shortwave dial searching for any information and found one that came across weakly and faint.

The broadcast stated that it had indeed been an invasion orchestrated by Chinese and Korean sleeper cells in the Pacific Northwest and down through northern California east to North Dakota. An estimated sleeper force numbering in the hundreds had sabotaged, damaged and crippled power grids, communications, and public utilities all across the northwest.

Other sleeper cells had attempted sabotage of facilities in several other western states but had been thwarted and were either captured or killed.

Small limited tactical nuclear devices had been detonated over a few cities with truck mounted nukes driven in and exploded in larger cities in a coordinated attack to render civilian and military opposition useless in the direct vicinity of the attacks.

Regular military forces had taken over several strategic small and medium cities dropping troops parachuting from planes and some coming across the Canadian border. US forces had been unable to respond in time to prevent key locations from falling and were hesitant to respond with military forces in fear of retaliation against its citizens in response.

Whoever had orchestrated this invasion knew how to strategically place hundred of operatives in several key cities and all of them on the same day in over a dozen western states carrying out their planned disruption and destruction.

Throughout the next couple days you listened to any broadcasts you could find. The regular AM and FM radio stations were off the air except one or two large national ones in Denver and Los Angeles. 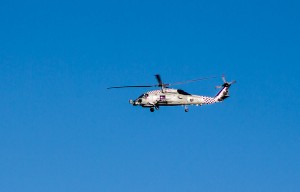 It seems no one was talking about Idaho and with the remote location of Lewistown help would not be coming for quite a while.

You figured it wasn’t as though US response wasn’t coming but how to implement it without getting its citizens slaughtered.

You were one man with a .22 rifle and 12 gauge shotguns against a cadre numbering in the dozens or hundreds and you didn’t know where they were or how to do anything even if you did.

You remembered when Derrick your college roommate and high school friend had joined Army ROTC your freshman year and over the next few summers trained on weekends and in summer in Fort Lewis, Washington and in Colorado Springs, Colorado. Derrick’s fascination and love with weapons had prompted you both to go to gun ranges in Boise a couple times when you both drove home to visit family. You both had rented handguns and automatic weapons on several occasions shooting at targets in an indoor shooting range.

Derrick went into the Army as an officer right after college and had been stationed in Germany a few years back and had married a woman he met while stationed there. He would have been just the person you wished were here now to tell you what to do in your present circumstances.

Whatever you’re supposed future would hold in store you had to know exactly what you were dealing with, where they were located and figure a way to resupply yourself caching stores of foods and gear in different locations so you could keep on the move as to not create a routine pattern that might be detected.

You had no idea of the actual month and day but knew the Idaho winter wasn’t many months away and you could never survive for long being out in the wilderness with the frigid temperatures and snowfall. The only place you could hold up for the winter would be in an abandoned farm location or in houses on the outskirts of Lewistown where you could stay warm and dry. The prospect was not one you relished making but the choice was obvious move closer to town or perish when the Idaho winter blew in with temperatures dropping below zero.

You would also need heavier clothing and layered undergarments and boots for walking in the snow, getting those shouldn’t prove to be much of a problem. You could try to make your way back to your apartment to retrieve your own clothes. Or break into a store and take what you needed. The trouble was the only stores like that were in Lewistown and danger, so back to Lapwai and your own clothes.

Your USGS maps showed several clusters of buildings that had to be farms and sporadic buildings near woods areas 10 miles to the southeast of Lewistown with access to water and ways to escape into wooded areas within a hundred yards of the buildings.

Going due west for about 3 hours would allow you to check out several county owned maintenance properties and see if any homes and farm buildings were still vacant. You could pack your wheel barrow with the 250 pounds of gear and food and be back there in the same day and get settled in for a long winter stay.

Guarding Your Home against Home Invasion