Man in the Wilderness – Pt-5

You dug a fire pit which consisted of two 2 foot deep holes one larger than the other for wood to be placed vertically and connecting by an air hole to the adjoining hole to circulate air and make the flame hotter. you could cook small game and fish and did the few times you caught and cleaned them.

Your first bit of fresh meat was a small rabbit which you shot from about 25 feet away. You promptly gutted and skinned it and cut the 2 pounds of meat into sections to boil in a pot over the fire pit. It worked like a charm and dinner that evening was good.

As the Army manual suggested you disposed of the hide, bones and guts 1,000 feet from the cave where small forest animals would eat everything not leaving a trace after a couple days.

The Army manual said it was imperative to not soil your campsite leaving refuse and anything that would draw wildlife near and to properly dispose of all materials burned, buried or leftovers disposed of as you had the animal parts. It aided in your ability to remain undetected. 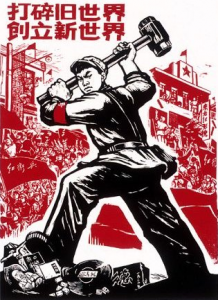 You’d been in the woods nearly three weeks and were out exploring toward the power lines when you heard a cacophony of engines and shouts and frankly you were beginning to panic thinking they had somehow found you.

The thought of detection is always a reality but in your situation highly suspicious that they would be looking for one man. You decided to investigate and got down behind some bushes near the end truck some 50 yards where you could clearly observe what they were doing.

There were five 2-1/2 ton trucks and a Humvee in the column and about 20 soldiers whose uniforms you couldn’t make out but one thing that you did see was they were not Caucasian but Oriental. You recognized the language as the sharp hard sounds of Korean you often heard in Tae Kwon Do class spoken between the Master and his assistants who were all Korean. What would Korean soldiers be doing in Idaho?

Then it hit you and hit you hard we had been invaded by Chinese and Korean troops coming in across the Canadian border.

The soldiers had stopped to re-tie a canvas that had come loose and was flopping like a sail in the wind exposing cases of something stacking high and deep. They got it tied down, several relieving themselves on the side of the road and mounting up to head east as the first truck had a couple weeks earlier.

You accessed your situation and location. You were 1-1/2 miles south southwest of this position and the service road veered to the north less than ¾ of a mile away and according to the USGS map extended dozens of miles more due north. So this must be a convenient supply and troop movement route used to avoid detection by normal transport routes by our military if any were still left.

As a little kid you remembered your 80-year old great uncle Walt talking about the Korean War against the Chinese and how barbaric they were to prisoners often just killing them as to not have to guard of feed them. That was over 60 years ago but they were invaders and any resistance would probably be met with violence or a bullet to settle the disturbance.

You thought it over and decided for your own safety to do some due diligence and locate two other safe camps within an hour’s walk away from the power lines to the south and west from the cave.

The USGS map showed what was designated a structure about 3 miles away from your cave’s location and you decided to see what it actually was and left the following morning at first light with a ration of food, water and your rifle with 100 rounds of ammunition. The trip through the woods wasn’t fast and required just over an hour. The building was a one story block structure with a low shingled roof and a chimney. You approached slowly looking for a vehicle or signs of people and detected nothing. There was a narrow vehicle path made up of two barely visible parallel ruts leading away and you could tell had not been used in quite some time. The building was shuttered and solid wooden door padlocked. You picked up a large rock and after a dozen tries broke the hinged connection and opened the wooden door. 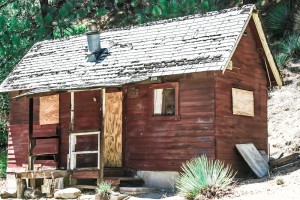 The building was maybe 16 feet by 20 feet it consisted of one room with sparse furnishings and a cot. There were four boxes of MRE’s stacked up unopened in one corner and several tools hanging on hooks a shovel, axe and sickle. These were going home with you or at least what you could manage to carry. The boxes of MRE’s were about 26 pounds each and contained 24 packets of food you would carry each one back on separate trips over the next week.

In the preceding month you located two other camps in heavily wooded areas with heavy underbrush as was your first campsite when I first arrived at the Eco-Sanctuary. Using the full size shovel you dug a slit trench, gathered and stacked wood and cleaned off a tent site in each location. You hung one MRE box on a tree branch in each location. You had found three old plastic sealable storage cans you filled with excess gear, medical supplies, ammo, a little bit of dehydrated food pouches and buried them on top of the tent site which located on a flat rise so you would have emergency access in case you had to make a break for it.

Your idea was to randomly move between campsites once each week as to not set up a discernible pattern to your movements in case you were being watched. You would stay a week, cover the slit trench over with brush, bury the fire pit and cover it with leaves and dead branches as to not leave a trace in case someone wandered into the campsites.

Your theory would pay off in saving your life.