Man in the Wilderness – Pt-4

You walked through the aisles at Bass Pro one day when you drove home to see mom and dad gazing at row after row of backpacks, sleeping bags, canteens, purification devices, foods and hundreds of other items and decided to keep your budget to $1,000 and the weight to fewer than 50# with everything needed for sustaining yourself for a couple months. You had gone overboard on the food supplies buying nearly 30# worth and having to buy an extra compression bag to hook them to your already crammed full backpack.

You had extra socks and under wear enough for a week, two pairs of jeans, five light and heavy shirts, windbreaker and an extra hat all in a tightly compressed compression bag since it was no longer necessary to worry about wrinkles since there was no one to criticize the way you look anyway.

You decided to unpack and arrange your quarters into areas for specific things like clothes, gear, personal effects, extra water and leave the foods hanging to escape detection and consumption by the woodland critters. 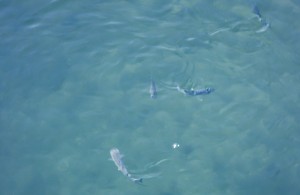 The day warmed up and you decided to try your hand at fishing and cut a short but stout pole about 6-feet long of strong oak. You made a notch and groove with your pocket knife around the end where you were going to attach the 20# test monofilament green fishing line with its steel leader, Eagle brand hook and synthetic plastic bobber. Your rig was all ready so now the matter of finding bait.

You stroll casually down the rise near the stream and come to an area covered by fallen leaves and kicking them aside exposing the bare ground and you spy four fat, juicy grubs laying there and pick one of them up and fix it on the hook and continue your walk to the streams pool and toss your bait and line in as deep a water as you can find. You figure it’s about 4 feet deep and you let the line sink and wait…

In a few minutes the bobber begins to pop below the surface and you give a light pull and BAM! You’re in business and have your first fish. You raise the pole above your head and haul in a trout about 8 inches long, oh well better than nothing and you get your hand wet before touching the trout as the manual had said to do and unhook it releasing it back into the pool. No need to start fishing now until your food was about half gone and there was plenty to do before that to just live.

Knowing more about your area was vital, the USGS quadrangle maps you bought showing the entire Nez Perce Reservation and you studied the area carefully out to about 2,000 yards in each direction.

The map showed an outcropping of rocks with a high elevation and you decided to go exploring. With rifle in hand you headed out to the west the rocks were about 1,600 yards away from your camp. The walk took just under 15 minutes and you found the rise with a shallow ravine on the south side and an outcropping of large boulders covered with brush. You pushed the brush aside with your walking staff and exposed a small cave 3 feet across and 5 feet high. Squatting down you looked inside and using your LED flashlight shined it inside to reveal a dry floor and a fairly large interior maybe 10 feet deep and 6 feet wide and just maybe enough room to stand in.

The Army manual said a brief bit about having a stealth hiding place just in case of danger you couldn’t face without severe consequences’ and this would certainly work for just that purpose. The shallow stream meandered close by not 200 yards away and there was plenty of fallen dry wood. You decided that gathering wood might be a wise thing and the cave would keep it dry and safe. You’d move your excess gear to the cave to stow it until needed and even bring the extra pouches of food you could hang as a reserve cache.

As you made your way back to camp you kept thinking how perfect the cave would be to house your stuff and you. It was out of the elements, away from the service road 1-1/2 miles, as near the water source as your current camp and shielded from view in nearly every direction by brush and elevated ground would provide a field of view for several hundred feet.

Yep, that’s it your new home. You begin to break down your tent, pack up your gear, clothes and food and headed out. Getting in and out of the cave took a little effort. You had to push back the 8-foot high bushes without breaking anything, removing the rifle and backpack, kneeling down and crawling inside dragging the pack and other goods in behind you.

You could stand up ok your 6’-2”, 200 pound frame almost brushing the ceiling and the inside was not as big as you’d first guessed it was maybe 6 feet wide and 8 feet deep but plenty of room at least as much as the tent was. You would learn to adapt and to live as comfortably as you could.

You arranged the food hanging in its black bags in four locations one close to the cave and others as far out as 1,500 feet to be safe and not have “all your eggs in one basket” as your grandmother had been so fond of using while you were growing up.

You left your wood at the old campsite as reserve when you needed it and had enough wood here to make due for a week at a time when you could gather more as needed.

The sleeping pad was necessary on the hard packed floor for comfort and you once again laid out clothes, gear and medical items in separate areas for convenience. You decided to give added protection and laid down a 6 foot by 10 foot black tarp on the ground as a safe guard against moisture and cold. Your sleeping bag was a mummy type rated to 20 degrees and should be plenty comfy.

You reconnoitered the area out about 1,000 yards in each direction over a 3 day period using the USGS map you marked areas of importance such as the berry patches, stream crossings and water gathering spots, dead wood spots where there was an abundance of fallen trees.

You decided for your own piece of mind to secure your cave site. The cave was in a hillside but set back some 8 feet in the shallow ravine. On the top of the hill a large 60 foot tall oak tree provided a large canopy of cover and the hill was covered with thick brush some 4 to 8 feet in height. You cut a dozen 6-foot long poles you found 1,000 yards away from the cave during your exploration. I sharpened the ends, hardening them in a fire and sharpened them into what you considered fairly lethal points capable of being used as a spear. Each pole weighed nearly 2 pounds and was 1-1/2 inches thick and wouldn’t break on impact when thrown. You would attempt to use these spears to bring down bigger game such as deer and wild pigs at least that was your intention.

The deer paths crisscrossed within 100 yards of your new home and in two places a large tree hung above the path where I could crouch on a large limb hidden in the branches where you could wait on an animal coming down the path and hurl your spear into its body bringing it down.

The more you thought about it you thought a little practice might be in order first. Your first attempts sent the spears wobbling striking about 30 feet away much to your chagrin but you were determined and practice did make perfect. You learned the balance point and a good method of delivery that worked for you and could throw each accurately for a distance of 50 feet sticking them in the makeshift target nearly every time.

The 2-1/2 gallon bucket you filled every morning took out what you needed to filter to drink and wash and left the remainder hanging on a tree branch in the sun where the black surface warmed the water and taking a sponge bath wasn’t too objectionable. You washed your dirty clothes in the steam after having worn them for 5 days it was about time and hung them to dry near the water bucket. You changed into fresh jeans and a long sleeve shirt to complete chores around the camp.

You had gathered enough wood concealed in four areas in a week to last a month and as long as the season lasted gather blueberries and black berries in your spare hat till it was filled and had a feast loving every juicy morsel.

The conveniences were not all convenient and the folding shovel you bought was a pain in the ass to dig with and it had taken nearly four hours to dig a slit trench 15 feet long, a foot wide and a foot deep for handling your bodily functions. You would do your business and cover it over with the excess piled soil. It was dug 200 feet from the stream on the downward side of a small incline where horizontal flow of rainwater wouldn’t pollute the stream.

When you think of what conveniences exist in the wilderness there are not many, what do exist are manmade whith the exception of your cozy cave.

Man in the Wilderness - Pt-3