Man in the Wilderness – Pt-7 – Reconnaissance 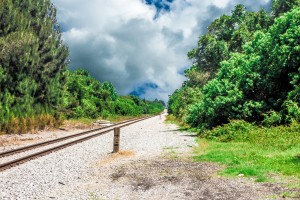 You were up before first light and headed west to the Burlington Northern railroad tracks intersecting the Carras Praire Railroad. The railroad tracks ran north of town along the Clearwater River just over 15 miles away and following them you would stay off side roads hoping to avoid detection or running into patrols. You would then make your way west to the area south of town and try to observe what was there if anything going on near the airport and try to locate any supplies you might take with you.

The pace you kept up after a month of hard living was quick and steady you made the trip in just over 4 hours the sun was just past its zenith so you determined it must be around 2p. You stopped to rest, eat and hydrate. The day was nice and warm and you had to travel on the access road the entire trip.

You kept to the tall grass as to not leave fresh boot print for roaming patrols to come across and alert whoever was in charge.

A hill on the south of town held radio and microwave towers for communication the elevations were about 500 feet and that is where you figured you would be able to see into town.

Getting up the slope was not difficult you avoided the road to the top which may have been guarded not wishing to run the risk of being seen.

Twenty minutes after you started the ascent you reached the top. No people were around, the chain link fence gate had been smashed, the building by the radio tower blown apart with an explosive and was now abandoned.

That seemed an odd thing for an invader to do.

You climbed the ladder to the flat roof crawling to the front of the building and pulling your binoculars you took your first look at your old home.

There was little movement only a few military vehicles to the east along the highway and little movement in the town itself. A few people could be seen, no animals or sound detected, it appeared to be deserted maybe radiation from the blast made it radioactive unable to safely move about without being poisoned.

The Army manual talked about that and said that radioactivity would be mainly long-term in any conductive metals but would deteriorate over a few months.

You were determined to investigate. You left your perch to begin your descent into an investigation of your old haunts and homes of close friends, radiation poisoning that could kill you or imprisonment if you were caught.

The road leading to the base of the hill was deserted and the fastest and safest way down you could not chance going down the way you climbed up cause a fall could injure or kill you and why do something stupid now?

As you approached town you stayed within the shadows of the warehouse buildings on the perimeter of town and entered through a window the concrete pipe factory building that had been closed for years the building was 800 feet long and still had the skeletons of old steel and concrete molding equipment in place in the yard and inside the building as if workers had just melted away or had gone home for the day.

This route allowed you to get close to town as the northwest side of the factory faced the truck docks where shipments had come and gone and stairs rose 40 feet above the docks to offices long abandoned. 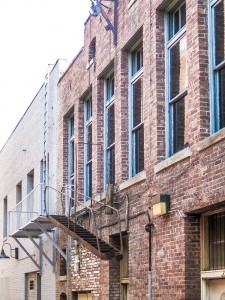 You climbed the steel stairs and opened an office door. Desks, filing cabinets and chairs still in place. You rummaged through each office you found a ½ full bottle of Jack Daniels which you kept, a few unused notebooks which you also kept to keep your daily journal going about what was happening in your life and adventure of staying alive.

In the farthest back corner office you found a false bottom under some hanging files and in the compartment was cash (useless), a Harrington Richardson 38 Special and 4 boxes of ammo, two full bottles of Old Grand Dad (these guys liked their booze – so would you) Lucky Strike cigarettes and a medical kit you took what you could use placing it in an old leather valise you found.

The gun was loaded and felt good in your hand. It would allow you to search with some measure of safety to shoot back or first if you encountered any hostile people.

Looking out partially open windows that afforded you an incredible high post to view any trucks or foot traffic.

You could see down South Point Avenue for 1/2 mile south of the airport before it curved north and south. The activity at the Lewiston Nez-Perce County Airport could be clearly seen with your binoculars. There was no traffic on the main drag through town but the airport was full of movement. You could see black helicopters, transport planes parked along the runway and transportation vehicles moving in and out the hangers next to the Bryden Canyon Public Golf Course where you used to play a few games of golf with your friends during your college days.

The runways were short but some of these smaller planes could land on shorter runway distances. The helicopters were like the ones you seen when your girlfriend Astrid and you were hiking near Fort Lewis, Washington a few years before. They bore no markings of any kind as did the transport planes. Rows of private aircraft still dotted grassy areas north of the runway and even more traffic could be seen to the off Lewiston Airport Road. You had been there several times and dozens of buildings and fuel tanks dotted the area. It was the perfect place to establish a base of operations.

From what you could see further in the distance it looked as though the major damage to Lewiston was near the intersections of where the Snake and Clearwater Rivers converged and west of the bridge between Washington State and Idaho was just off Main Street as was all areas of government and commerce for both Lewiston Idaho and Washington.

Man in the Wilderness - Pt-6