If you’ve been beating the internet up finding out what to do when the SHTF you can spend days reading commentary from hundred of folks and funny thing is the advice is all different.

I do want you to realize that when the SHTF paper money will be worthless except as fire starter or lighting that last cigar you’ve saved.

What will be the most valuable method of commerce? I will have to say silver. For over 5 millennia silver has been used for trade in every country on the face of the Earth, since the time of the Egyptian Pharaohs.

You hear about buy troy ounces of silver and gold but friend that will not be practical when the SHTF. You want silver in easily carried, small denominations. I think of small denominations as dimes in rollsthat are about 2-1/2 inches long and contain 50 dimes with a face value of $5.00. If you are buying pre-1964 – 90% silver dimes the current February 2015 price per ounce is $17.33 which is the equivalent of you buying 10 dimes to make one troy ounce.

Modern dimes are only copper clad and literally have a copper content value of about $0.02.

It’s stated by experts that silver in the near future could have values as high as $500 an ounce. That would mean one 90% silver dime you purchase in today’s market for $1.73 will be worth $50 that’s a tidy profit but don’t look at it that way – look at it as it has more trade or barter value.

What exactly is “barter value”?

From the very first days of human existence people have exchanged items they have for items they wanted from other people.

The introduction of actual coinage goes back to the time of the Persians about 600 BC when “struck silver” coins became mass produced and became a method of payment for goods and services.

Barter in the Survival Future

You may be wondering about the conditions and the value of barter when our economy collapses. We only need to go back less than 150 years to any part of the world at the end of almost any war.

In areas of the world especially Germany after WWI and WWII the deutschmarks were valueless and people we trying to trade wheel barrows full of paper money for a loaf of bread.

The same will be commonplace when the global economies are affected. Paper money of any denomination will cease to have value over time but not immediately.

Even in times of economic hardship entrepreneurial folks will form businesses selling items of value. People recognize silver and gold are precious metals and that they are always valuable. They are going to be willing to exchange items in barter for 90% silver coins.

I didn’t mention silver quarters of half dollars simply because of their size. One troy ounce of silver is 10 silver dimes and series of denominations of ten is a method of counting every child learns in school so it makes sense to use smaller more numerous coinages for barter.

During the post-war eras one silver coin would purchase a loaf of bread or a ration of meat, salt or sugar; it’s likely to be the same in the SHTF future. 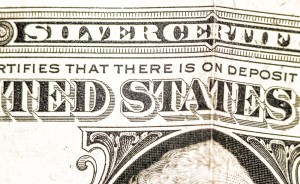 One fact for certain is item-for-item trade and coinage barter will be the medium of exchange everywhere.

I read an article the author wrote that “one bullet would be traded for one loaf of bread”; that just didn’t make any sense to me.

A person with a gun which there will be a proliferation of will not be so keen to hand over an item that could bring down a deer or hog that once field dressed butchered could produce one hundred pounds of meat which would definitely feed the family for a long time and could be used to barter for other goods.

Items that will be of value in a SHTF future will be seen as having little value in today’s society.

Items such as sleeping bags, tents, backpacks, utensils, pots and pans, matches, bags to carry and transport numerous items, salt, sugar, honey and knives to name just a few. But in the SHTF future these will not only be necessary items but coveted and prized possessions that will fetch many other trade items in exchange.

Silver will be recognized as a base medium of exchange not gold. Silver is obtainable and in greater quantities than gold which is quite expensive even in today’s exchange at $1,228 an ounce. People will not be familiar with how to value a gold coin and will be normally hesitant to make a trade.

How much silver should I be buying?

Truthfully as much as you can afford, buying an ounce a month for about $20 is doable for most folks even on a limited budget.

My personal strategy is to buy a roll of fifty 90% silver dimes a month or 5 troy ounces which will run about $75 and over the course of a year’s investment I will accumulate 60 troy ounces or 5 pounds of silver. That is when I will stop buying because the weigh if I ever have to carrying it will get to be too much of a burden when water of food weighing the same could save my life.

Now for some families that $75 worth of silver dimes equals a week’s worth of groceries and they will be hesitant so only invest in what you can.

I am not an expert never claimed to be but having a bargaining chip that has held value for 3,000 years like silver seems a common sense idea.

When you’re out and about in the SHTF future you can carry a roll of fifty dimes and have a strong medium of recognizable exchange that will fit in the palm of your closed fist.

But like anyone’s opinion, it’s just that – an opinion not an obligation or that you’d be stupid not to do it.

What happens before the SHTF?