Many people might attribute this to pollution even though California has some of the strongest clean air legislation in the United States. This would tend to rule out pollution as a source especially when it appears that this spike appeared over a 3 hour period starting on February 25th. A spike of this level would take several days to build up under a stagnant air period if it was being caused by pollution, forest fires, or other known causes. Considering winds in California have been averaging between 5 and 15 miles per hour in most of the affected areas during this time, pollution and stagnant air is not likely the cause.

A report by geophysicist Ramesh Singh released in 2010 concluded that Earth emits a burst of carbon monoxide a few days before an earthquake. This was determined when scientists were studying satellite remote sensing data collected around the time when a 7.6 magnitude earthquake shook Gujarat in western India.

The scientists involved in the study concluded that carbon monoxide is forced out of the earth due to a build up tectonic stress in the days leading up to a large earthquake.

Many scientists claim that the west coast of the US is over due for a “big one”. CBS news recently reported that scientist claim the fault line called the Cascadia subduction zone that runs for 700 miles off the Pacific Northwest coast from Vancouver through parts of California. Creates an earthquake around magnitude 9.0 every 240 years. It has been 315 years since the last quake of that magnitude. 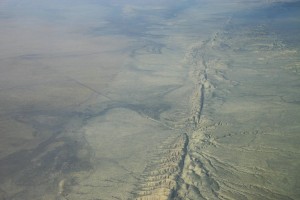 In southern California, the famous San Andreas fault is overdue for a major event as well. Recent research in the southern 60 miles of the San Andreas fault in the area around Coachella Valley showed that a major earthquake happens there once every 180 years. The last earthquake to hit that section of the fault-line was in 1690. Because this stretch of the fault has had more than 300 years to accumulate stress, the researchers said it is likely to produce a major quake in the next few decades.

These are not the only two fault zones that are overdue for an earthquake in California. Over the previous 700 years, major earthquakes have struck the Los Angeles area every 45-144 years. The most recent one was 153 years ago.

Any geologist will tell you that the west coast of the United States is overdue for an earthquake. This recent spike in carbon monoxide levels might prove that the big one is coming sooner then we thought.

Whenever the big one hits California, you can be sure that life will not be easy for the survivors. Most survivors will find that access to clean drinking water is gone as most water mains will have been broken in the quake. NBC 7 in San Diego reported that a 7.8 earthquake on the San Andreas fault could sever all four aqueducts cutting off 70% of the water to southern California. Utilities such as electricity, natural gas, gasoline, telephones, etc. will be interrupted for days, weeks or longer.

A major earthquake in California may not be the end of the world, but if you live in an affected area, it sure will feel like it.

The carbon monoxide increase cited in this article appears to be the result of an error in satellite readings. NASA released a statement stating:

IMPORTANT NOTICE: Elevated carbon monoxide (CO) concentrations over California in the GEOS-5 products since February 25, 2016, are incorrect. They are a consequence of unrealistic emissions derived from satellite observations of fires, which led to elevated concentrations of atmospheric CO (as well as other species).

NASA’s EOS-Terra spacecraft entered safe mode on February 18, 2016, during an inclination adjustment maneuver. This caused the MODIS instrument to enter safe mode, with the nadir and space-view doors closed. When the Terra MODIS transitioned back to science mode on February 24, 2016, the operating temperatures for the SWIR and LWIR (Short-wave Infrared and Longwave infrared) focal planes have not yet stabilized. As a consequence, some data products have been severely degraded. This includes the “Fire Radiative Power” fields that are used by GEOS-5 to compute emissions of CO, CO2, and carbonaceous aerosols by biomass burning.

GMAO is working to correct this problem. The GEOS-5 analyses will be re-run from February 24, 2016, using only the EOS-Aqua MODIS data, in order to exclude the unrealistic CO emissions. EOS-Terra observations will be re-introduced once the instrument has stabilized.

However, this does not change the fact that most geologists agree that California is overdue for a large earthquake. It is imperative for people living on the west coast of the United States to be prepared for this eventual (if not imminent) catastrophe.

The Number One Knife Skill for Wilderness Survival and Self-Reliance

300 Resources to Guide You on the Path to Radical Freedom