Are Silver Prices Set to Skyrocket in 2016?

I’ve talked about the benefits of holding a hard asset like silver as a hedge against the monetary system collapse. The Greeks used silver bars for trade in the 4th century BC, and it backed some currency or another from then until the 1971 when US president Richard Nixon cancelled the direct convertibility of the United States dollar to precious metals. Through its use in industry, jewelry, tableware, and investments, silver will always have value, therefore you should always have some on you. (I know a jeweler who sells me silver jewelry barely over spot. I keep a big gaudy silver necklace on when I travel in case I loose my wallet, and need some cash.) But silver prices fluctuate. So when is a good time to buy? 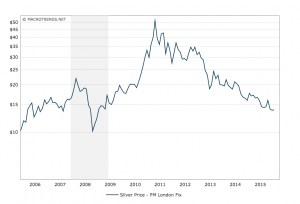 Right now, silver prices are low. Silver prices haven’t been this low since 2008. They may still have some room drop, and we may see $10 or lower ounces this year. But I think we will see silver doubling (at least) by years end. Some folks are predicting $50 pre ounce prices or higher. So why are people predicting huge gains for silver?

Silver production is dropping. It is down 20% in America, 31% in Canada, and 41% in Australia. Old mines are drying up, and with prices this low, mining companies don’t feel there is enough profit in finding new mines. 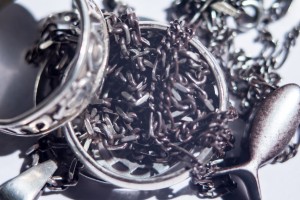 What Does That Mean for Silver Prices?

It doesn’t take an economist to tell you that low supply and high demand means that prices will go up. The question is why haven’t they already? It seems obvious that someone is manipulating the silver market. However, you can’t manipulate a commodities market for ever. Scarcity at the street level will cause prices to go up. Even if the official markets don’t acknowledge it at first. But when they do, you can expect some significant leaps in price.

So get into silver this year. If I am wrong, silver will still increase in value over the long run. It will always be a good hedge against inflation, it will always be transferable for cash (no matter who’s flag you are under), and it is on sale now!

Videos about the Current Silver Situation

Winter Homesteading: A Must-Read Guide to Staying Ahead

Here’s How to Protect Yourself From Mob Violence