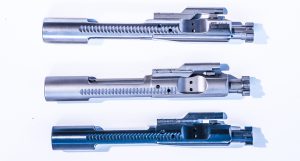 Several years ago, I decided I enjoyed freedom, common sense, and my own money. So I decided to move away from California and head to a more conservative state. I had always been a gun owner (since my father bought me my first bolt action .22lr when I was 10 years old). When I lived in Ca, I owned a pistol, a shotgun, and a lever gun. Those guns helped me stop 3 break-ins at my Los Angeles area home over the 20 years that I lived there, and I am probably alive because of them. I was a proud gun owner, but not a gun enthusiast. The closest I got to gun porn was the latest Hollywood action movie, and I was lucky if I made it to the range once a year.

When I moved to a more conservative state, I started meeting people that were in a panic that Obama was going to ban AR-15’s. Just in case, I bought one.

To be honest, up until that point, I really didn’t like the AR-15. I thought .223 was an underpowered round… a glorified .22 if you will. And, I had heard that the AR-15 was unreliable. But hey, if the government says I shouldn’t have something, that usually means I need to go get it. And once I had, I became much more enthusiastic about my firearm hobby. I now own a few more guns (they are like tattoo’s… how many do you need? Just one more), I try to make it to the range several times per month, and I read several gun blogs and keep up with several gun channels on youtube. 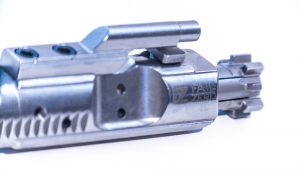 After getting my first AR-15, I quickly realized what made this weapon platform so great: customizability. The design of the AR-15 makes it very simple to disassemble and clean, repair or swap out parts. (and if you do keep it clean, it is very reliable). Notice I called the AR-15 a weapon platform and not a weapon. For the non-gun enthusiast here, that is because an AR-15 can be multiple different weapons. It can be a long rifle, a carbine, or a pistol. It can fire many different calibers, it can use a gas system or a piston system, etc. This is why it is not possible to ban the AR-15. There will always be a type of build that does not fit the criteria for the ban. California has some of the strictest regulations regarding AR-15s in the country. Yet every feature that is illegal in California for an AR-15 in a standard .223 build is legal if you simply swap the bolt carrier group and magazine so that the weapon is a .22 instead of a .223. (.22lr is a rimfire cartridge and the Ca law applies specifically to centerfire weapons)

When I was first learning about my AR-15, someone told me that brake cleaner is a great way to clean the firearm. I decided to give it a try, and it did a great job of cleaning the residue from the firearm. I couldn’t find my gun oil at the time (I keep all my gun cleaning supplies together now), so I figured I would just oil it up before I brought it to the range the next time… Well, I forgot. As I am sure some of you have already figured out, that bolt seized in the open position, and I had to take the gun apart to get it going again. It was after that incident that I started hearing about these nickel boron bolt carrier groups (BCG). One day at the gun show, I saw a nickel boron BCG for $120.00 so I picked it up. I haven’t tried to fire it dry, but it seemed to be a better piece, and it seemed easier to clean then the mil-spec BCG I had originally. I was very happy with the purchase. 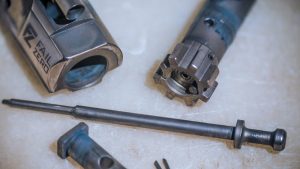 Not too long ago, I decided to build a 300 Blackout AR pistol. As I was figuring what parts to get, I noticed that Fail Zero had their BCG for $160 on their website. I had heard from several people that Fail Zero was one of the better manufacturers of Nickel Boron BCG’s, so I decided to get one.

First of all, shipping was lightning fast. I received the BCG 2 days after I ordered it, and I paid for standard shipping. When I opened the box I was immediately impressed by the finish. My previous Nickel Boron BCG had a matte finish, the Fail Zero BCG was glossy. It felt smooth and slick, and I couldn’t wait to try it.

It took me a little while to get down to the range, and when I did, I didn’t have a lot of time. I just dumped 50 rounds through my 300 Blackout and calibrated the irons.

When I got back home and cleaned the weapon the next day, I was a bit surprised by how dirt the BCG was after only 50 rounds. The residue was not as easy to remove as I had expected either. It took a bit of elbow grease (maybe I should have gotten the brake cleaner out again…).

Overall though, I have to say, the FailZero BCG is far supieor to my milspec BCG, and for future builds, I will spend the extra bit of money for a FailZero BCG.

4 Reasons Why Prepping Is A Good Idea