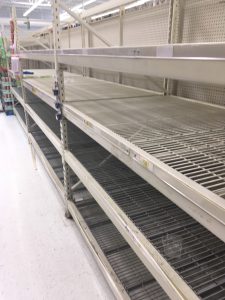 There is a common misconception in the mainstream media that peppers are a bunch of paranoid people, hoarders, or worse. Some of this may be attributed to the common usage in the pepper community of terms like “zombie apocalypse” or “end of the world as we know it: EOTWAWKI”. The truth is, these terms tend to represent an all encompassing “worst case scenario”, and most of us know that this is not what we are prepping for. However, most of us understand the concept that you should “hope for the best, and plan for the worst”, that is why we are preppers.

I live on the east coast of Florida. In the best of scenarios, we are still constantly struck with heavy thunderstorms, and massive lightning activity. Just last week a pump at a local city water facility was struck by lightning, and shut down for several hours. This left us with a “boil water notice” for several days. As one of those “crazy peppers” I keep 10 gallons of drinking water in my pantry at all times, so this was not a problem for me. As soon as the boil water notice was lifted, I re-upped my supply. I also keep a pantry full of canned meats, dried and powdered foods, and other supplies. I didn’t need those for the boil water notice, but I may need those when Hurricane Matthew hits here later this week.

Many of you have seen on the news that Hurricane Matthew is a major category 4 hurricane, and it looks like it is going to buzzsaw the east coast of the US. Although we do not expect a direct hit where I live, we are accepting 2 day of hurricane force weather as it passes just off shore.

I stopped at the local Walmart super center today to pick up some extra provisions and see the mayhem. As is predictable, water was sold out. So was most of the canned food. People truly were running around that store like it was the end of the world… and us Floridians deal with this a lot. You would think others would be better prepared. I was actually just there for some extra ammo because after the storm, it is those people that were unprepared that become the biggest threat.

You might be thinking “Well I don’t live in Florida, or on the east coast, so I don’t need to prep”. But these natural disasters happen everywhere. In the midwest? Look out for tornados and flooding. Up North? Blizzards are just as bad as hurricanes. Out west? Earthquakes give no warnings. And when it comes to tornados, and earthquakes that have little to no warning, you have a lot more people that get caught unprepared.

No matter who you are, or where you live, it is just common sense to have, at the minimum, 2 weeks worth of food and water stored away in a pantry for an emergency. You should have weapons available for self defense, and for hunting for food if that supply runs out. (Where I live we have dear, gators, and bears for big game, and plenty of rabbits and squirrels for small meals.)

Keep candles, batteries and flashlights. Charcoal and a grill (or cans of sterno if you are in a small apartment) for cooking. Be prepared, because the shit that hits the fan may not be a zombie apocalypse… it may be just a bad thunderstorm.

Preparing for another Clinton Presidency