Florida is one of the densest state in America with over 20 million year round residents and annually over 90 million tourists come to enjoy the attractions, weather and beaches and during “season” December through April more than 30 million are seasonal residents filling hotels, motels, RV parks and renting apartment and homes.

This crowding will make escaping Florida complete chaos when the lights go out.

Where are areas that will give the best chances of survival? There are two areas one in the northern and one in the southern part of the state. 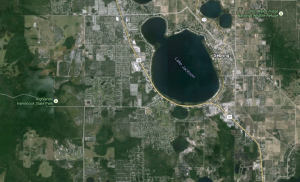 Sebring – a town of about 10,000 in south central Florida surrounded by eight (8) state parks and wildlife refuges and dozens of lakes and streams. It can offer some modicum of safety for those adventurers willing to camp in rather primitive conditions but have access to water the single most precious commodity during survival times.

Thousands of acres of partially developed areas that were never completed exist here, dirt roads and partially wooded tracts near water and with some hunting for small game, turkeys, deer and wild hogs.

Astor – a north central town with a population of less than 2,000 in north central Florida surrounded by twelve (12) state parks and wildlife refuges and dozens of lakes and streams the largest park being Ocala National Forest consisting of 607 square miles with more than 600 natural lakes and ponds, two major rivers and a plethora of small and large game.

While there are small pockets of wilderness none surpass these areas for safety or abundance of natural resources to survive a SHTF situation these areas can be considered a safe haven.

In a Survival Situation, Think Before You Act

Bugging Out From A Difficult Location