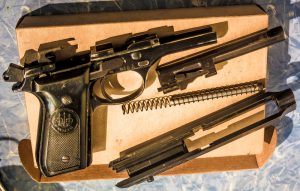 Recently, I came across another deal that just seems to good to pass up… and as luck would have (at the time of writing), you too can get in on this deal. Southern Ohio Guns is currently selling factory refurbished, Surplus Italian Police Beretta 92s’s for under $300.

*They also have these available at Classic Firearms for $299

The Beretta 92 is well known, well established firearm that is known for its reliability. The surplus Beretta 92s is the second generation model. The later 92fs model became the service pistol for the US Army in 1985-ish.

There are a few differences between the 92s and the later 92fs. The most obvious difference is the mag release, While the 92fs has the American style mag release by the trigger guard, the 92s has the European style mag release by the heal. Some people may not like this placement, but it doesn’t bother me. My first pistol was a Grendel p-12, and it has a mag release down by the heel as well, so I am used to it. I have seen some people complain about this, but seriously, do you really drop mags? I usually have my hand down there to catch the mag on the way out anyway, so having the button there just means I release with the hand I am grabbing the mag with.

The Beretta 92s is not a concealed carry pistol. (I know some people may carry it concealed, I personally think there are better options.) It is, however, a good gun to have in a SHTF situation.

The Beretta 92s for SHTF

I believe that a firearm is a tool. And just because you have a phillips head screw driver, that doesn’t mean you have the right phillips head screw driver for the job you are doing. For me, I feel that a 9mm is not the best self defense weapon to choose. I EDC a Kel-Tec p3at .380. Why? because when my biggest threat is likely to be someone trying to rob me in a parking lot, or someone breaking into my house, a .380 is good enough to get the job done (a .380 is 9x17mm and is called a 9mm short in Europe, a 9mm Parabellum is 9x19mm). Also, the p3at is small enough to easily carry concealed without being cumbersome.

However, a SHTF situation is a different story. If you need to bug out, concealment and comfort are no longer the top priority. The surplus Beretta 92s becomes a great weapon for SHTF for several reasons.

First is reliability. Ask any veteran who carried the Beretta as a service pistol and they will tell you: The 92 is a reliable firearm. The surplus Beretta 92s is just as reliable as it’s later brethren the 92fs, and M9.

Second is ease of use. The Beretta 92 series is big, heavy firearm. What that means is it has very little perceived recoil compared to other 9mm handguns. As a result, it is easier to control, and keep on target in a stressful combat situation. The Beretta 92s (although it doesn’t have the better sites that the later models have) is a very accurate weapon. The 92 series is also simple to teardown, clean and maintain. This is advantages when you need to bug out.

Third is availability of supplies. In a regular day to day self defense weapon, ammo availability is not a concern. There are multiple stores within miles of my house that carry any type of ammo I may need. But if you need to bug out in a SHTF scenario, ammo availability changes. Let’s face it, the 9mm Parabellum is probably the most popular handgun caliber in use today. It is also the only authorized variant of 9 millimeter ammunition for North Atlantic Treaty Organization (NATO) countries. What that means is that in a zombie apocalypse… it is the round you are most likely to find when scavenging.

*Parabellum comes from the Latin term “Si Vis Pacem, Param Bellum,” which translates to “If you seek peace, prepare for war.” This makes it a poetic round for preppers as well. 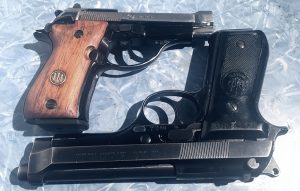 So I have gone over why I like the Beretta 92s in general, now what about the surplus models that you can find online? Well first there is the price. A new Beretta 92fs will cost you between $600 and $1,000 depending on the options. Even used, you would be lucky to find one under $550. So finding a surplus Beretta 92s for under $300 is a steal. The one that I bought has expected wear for a 30+ year old service pistol. There is holster wear, and it looks like there was a bit of rust on the slide that had been removed before it got to me (these are supposed to be factory refurbished, and mine did come in Beretta box… that said 92fs). Mechanically, it is in amazing condition. The weapon is smooth and feels great in the hand.

I was a bit surprised to see how dirty it was. It seemed like someone put a hundred rounds through it before boxing it up, and didn’t clean it. There was a lot of powder residue in the barrel, and slide. The magazine was in the worst shape. It had a bit of rust on it, and there was also tape residue. A quick going over with some super fine 0000 steel wool, and a new coat of gun oil fixed that though.

I am also not very impressed with the grips. They appear to be black bakelite. I will likely get wooden grips to replace them, but those are easily found online.

After taking the surplus Beretta 92s to the range and dumping a box of 115 grain FMJ through it, I have to say that this firearm shoots great. The gun is very comfortable to shoot. The grip fits, and the action is smooth. I had no failures, and was able to keep a pretty tight group. The recoil was comparable to the my Beretta 84bb (that fires .380), and that is to be expected since the shear size and weight of this weapon would mitigate any extra recoil above what the .380 is giving out. It does seem to shoot dirty (or maybe that is the nature of 9mm, or the Magtech ammo?). After just 1 box of ammo it was just as dirty as it was when I received it. My Beretta 84bb doesn’t get that dirty, even when I put double the rounds through it.

Overall, I really think that you can’t go wrong with a Beretta 92 for under $300. This is a rugged, workhorse of a handgun. I would feel comfortable and secure having this in an emergency situation, or even carrying it in certain scenarios. If this deal is still up when you read this, buy one. It may never be your ccw, but a surplus Beretta 92s will be a great SHTF gun. (just remember to throw some gun oil and a package of gun cleaning cloths in your bug out bag).

This is How You Can Dodge Facial Recognition Software