How to Choose What Caliber Firearm to Purchase

I think it is time we have some common sense talk about firearm caliber on the internet. It seems to be lacking.

The prevailing wisdom online seems to be “get as big a gun as you can handle”. Get a 45. If you can’t handle that, get a 9mm, etc… The average online (or gun store) “pro” wants you to believe that bigger is always better. This is silly, and shows a lack of common sense. 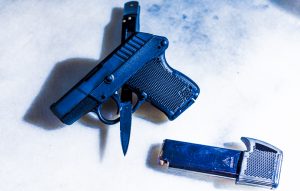 The truth about firearms and calibers is that you need to buy something that is good for what you plan on doing with it.

If you own a large piece of property, and are constantly worried about large predators attacking you live stock, then maybe you should cary the largest weapon that you can handle properly. By handle properly, I mean acquire target, fire, re-acquire target and fire again in a timely manner. If a pack of wolves is coming at you, and you can’t handle the recoil of a 45, you are in trouble.

If you are buying a weapon because you are planning for a SHTF situation, then a 9mm might be your best option. The popularity of the caliber should mean that you will be able to scavenge ammunition for it rather easily. But again, if a bunch of zombies are coming at you, you need to be fast and accurate. If you can’t handle the 9mm, don’t buy it.

If you live in a relatively safe suburban area, and just want a firearm for self defense, almost anything can work.

I don’t leave home unarmed. However, I don’t want a big bulky weapon. Considering the only real world scenarios I will likely be in would be a parking lot mugging, or an armed robbery in a store or restaurant that I happen to be in, a small .380 is perfect for me. I carry the Kel-Tec P3at, and it is small enough, lite enough and unobtrusive enough for me while still being plenty deadly. Many people say the .380 is worthless, and I should carry a 9mm. Well the truth is, a 9mm is 9x19mm and a .380 is 9x17mm. What that difference does is make the 9mm slightly faster, and give it slightly more penetration. The average confrontation is under 7 meters distance between you and your advisory, so the speed difference is inconsequential. The penetration, on the other hand… Both a .380 and 9mm have enough penetration to be fatal, however, a 9mm is more likely to exit and still do damage to someone else. Sure, if I made a habit out of shooting into moving cars, or through walls, the little bit of extra powder in a 9mm might be useful.

Unlike what most people on the internet tend to claim, a .22lr is even a good round for self defense. Good .22lr ammunition fires at about the same velocity as a 9mm (depending on the barrel length of the weapon). However, .22lr ammunition tends to go into a person and bounce around. This tends to cause more damage. Another advantage a .22 has is that the recoil is so lite that it is very easy to have a tight grouping fired fairly fast. For day to day self defense, I would feel perfectly safe with a little Phoenix Arms 22… But my .380 is smaller, lighter and more powerful, so I am sticking with it. Below is a video showing that a .22lr round can still deliver a fatal impact at 450 yards (that’s a quarter mile). Sure, it is from a rifle, but most handgun confrontations are at about 20 feet so a .22lr would be very effective.

I find it very humorous that many of the same people that claim “bigger is better” when it comes to firearms, immediately write off .22’s as “toys”, and are also AR-15 junkies. The .223 round is really just a 22 caliber projectile with a lot of powder behind it. Now don’t get me wrong, I own an AR-15. It is an extremely fun weapon to shoot. It is versatile, it looks cool, and it has great penetration (if your shooting into houses and through cars). However, the NATO 5.5k round (the .223 is the civilian version) was designed to be a “non-lethal” round. All that extra powder was designed to make the projectile go strait through a person with minimal damage. Put 3 rounds in someone and they are out of the fight, but will likely live. (unless you hit an artery or something vital.) The slower .22lr round is more likely to bounce around and cause more damage. Don’t believe me? check out this video below of someone comparing an AR-15 to a .22lr.

The reality is, choosing a firearm depends on your needs. You don’t want to hunt bears with a single action 22 revolver anymore then you would want to carry a 50 cal sniper rifle for self defense.

If you want something small, unobtrusive, and easily concealable, try a .380. If it is difficult for you to handle, try a 32 or a 22. If you live in a high crime area, or an area teaming with large predators (wolfs, bears, panthers, etc) try a 9mm 40, or 45.

Keysmart for EDC: A Review of the Pocket Saving Keychain

This is How You Can Dodge Facial Recognition Software