What is the Best Breed for a Survival Dog?

I bet I get dozens of different varying opinions on this one subject.

First let’s look at dog breeds that have proven themselves in war and police duty.

As far back as 4,000 years dogs have been used as war dogs, messengers, trackers and in modern times for search and rescue and drug and bomb detection.

The Egyptians, Greeks and Romans were known to use dogs in war and for guarding homes and defense positions. 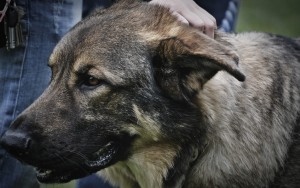 Nowadays many breeds have entered the mix for police and service dogs – Golden Retriever’s, Labrador’s and Belgian Milionis.

What, this isn’t your breed and you take issue with what is being written? I’d expect nothing else because truth is good dogs abound from Pit Bulls to your Aunt Ruby’s mutt Alice.

It’s about loyalty and most dogs have that character if they are loved and treated well by their owner.

With a little coaxing you can put a carry harness on them and gradually test different weights they can comfortable transport when you’re out on walks – this will determine how useful your lovable pet will be in times of crisis where you might have to abandon your home for personal safety.

Take my past Doberman Max a big breed at over 100# he could carry about 15# without too much effort. Doesn’t sound like much maybe but consider that weight compared to your dogs size. Max carried 15% of his body weight which if you figure the same using a 200# grown man that would equate to 30#.

Yes again not a lot of weight but consider our pets are not humans and usually not subject to doing any real labor intensive work. It can be taught over time to see what it is your pet can achieve but it has to be done in small increments not just what you decide they should be able to achieve.

You do not want to be responsible for an injury or their discomfort – would you?

Almost everyone would say absolutely not – those of you who are ignorant fools should have Fido bite you in the buttocks really hard.

Tips For A Nervous RV Newbie