It seams that every time there is a shooting that fits the anti gun peoples criteria, we have are subject to an overload of anti gun rhetoric, and the countless inconsequential opinions of people who want to ban guns. None of their arguments are based in fact, and quite frankly, none of them make sense.

So today, I am going to give you the top three reasons why strict gun control does not work.

Reason #1. It has not worked anywhere it was tried. Let’s look at 3 cities in the USA with strict gun control. New York, Chicago, and Detroit.

New York City has a murder rate of 4/100,000. That is 617 homicides in 2014 which was the lowest number in city history since 1963. This is a good decline in crime, yet still higher then the national average of 3.8/100,000. Many say that the reduction in the murder rate is due to the NY SAFE Act of 2013, but you can see from the chart to the right that the New York murder rate was in a steep decline before that. Instead, many believe that the reduction in murders in New York City was due to the stricter policing tactics such as “stop-and-frisk” that were implemented in 1990. 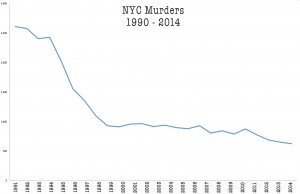 Chicago has a murder rate of 15.1/100,000. That is 432 murders in 2014. Chicago had a law that all handguns required a permit from the city, and the city refused to issue permits starting in 1982. The law was thrown out by the Supreme Court in 2010 (although gun laws in the city are still strict). The murder rate in the city was not affected by either incident.

Detroit has a murder rate of 43.5/100,000. That is astonishingly high. However, the city has a smaller population the either New York or Chicago. I wasn’t able to find historical data for Detroit per year stretching back to 1990, but I did find that in 1990, their were 595 murders in Detroit compared to the 316 in 2014. Gun ownership in Detroit is strongly regulated.

One thing you will notice in all three of these cities is that the murder rate has dropped drastically since 1990. This is a nationwide phenomena. In the past 25 years, the murder rate in the USA has dropped by over a third. In the same time, the population of the USA has increased from 249 million to 318 million. (but that doesn’t fit the fear mongering the mainstream media wants to feed you). 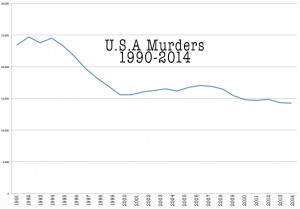 As a side note, California has some of the strictest gun laws in the country. Oakland California has a murder rate that averages around 20/100,000. Recently, the local government tried to pass even stricter gun laws, but the laws were vetoed by California Governor Jerry Brown (D) who said Another gun law won’t solve Oakland violence.

Of course many proponents of new gun control legislation will say that the numbers for these cities don’t matter because people can just drive to a neighboring city/state and purchase a gun. Okay, let’s look at a 3 countries that have strict gun control.

Australia enacted its gun ban in 1996. Murders have basically run flat, seeing only a small spike after the ban and then returning almost immediately to pre-ban numbers.

What these statistics show is that stricter gun control does not lower crime.

Reason #2 that stricter gun control does not reduce crime is, quite simply, the cat is already out of the bag.

The first canons were used in around 1300 AD. They were simple devices consisting of a metal tube sealed on one end, and open on the other. Gun powder was loaded into the tube, and a projectile was loaded in in front of the powder. The gun powder was ignited by a wick paced in a hole by the closed end of the metal tube, and the expanding gasses from the explosion propelled the projectile out the open end of the canon. This is basically how all guns work. By the early 1400’s, matchlock rifles and pistols had been developed. They were the first “modern” firearm in that they contained all three elements needed in one piece. The have a barrel (that housed and fired the projectile), a stock (for the wielder to hold), and a lock (the device used to ignite the gun powder). It is from this that we get the term “Lock, Stock, and Barrel”. To make a modern version of a flintlock pistol would cost you about $20 in parts from Home Depot. (although most homeowners would have all the parts they need easily accessible in their garage. ) Guns haven’t changed much since then although the manner in which to ignite the powder has

By the 1500’s the matchlock was replaced with the flintlock. This simply replaced a slow burning match with flint. You can find the parts to replicate a flintlock in a Zippo lighter.

In 1822 the percussion cap system was developed. This uses chemicals (like the ones used in “snap-pops”) that create a spark when they receive a sharp blow. Modern ammunition still uses this type of primer to ignite the gunpowder inside the bullet casing. (and by 1845 the .22 rim fire ammunition had been developed)

By 1833 breach loading weapons were developed. This is what all modern weapons are. 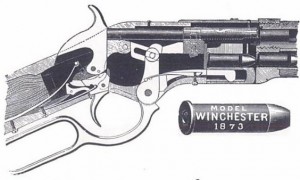 personally own a Winchester 1873. It is named that because it was first made in 1873. It is a reliable weapon, and made the same today as it was 142 years ago. And I have news for you. Anything that was designed in 1873, you can make in your garage today. Every electrician, plumber, and handyman in the country has the materials necessary to manufacture firearms in their shop. The items are completely unregulated.

Just for some added entertainment, check out these pages with a bunch of photos of confiscated home made guns from around the world.

This page is from someone in England who makes, and teaches others to make home made guns.

The Paris Attacks and the Need For Concealed Carry

Bugging Out On A Sailboat? Plan Your Escape Route