A Historical Perspective of Preppers

These days, a lot of people hear the term “preppers” and thing of some radical nut job waiting in an off grid cabin for the world to end. Terms like “zombie appocolypse” and EOTWAWKI (End of the World as We Know It) get thrown around a lot. The prepper community is often represented by the mainstream media as a fringe group of radicals.

Recently, while on vacation, I visited my mother, and aunt. We were talking about family history, and the people that have passed. My mother mentioned that when her grandmother passed away, the cellar looked like a grocery store. My great grandmother was a prepper. 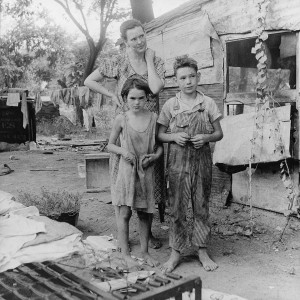 You see, my great grandmother was living in Pennsylvania raising 5 kids when the stock market collapsed in 1929. Those were hard times, and my family (along with many others) found survival difficult. When our nation emerged from the depression, many people were changed. People, like my great grandmother, understood the need to be prepared for a disaster.

Preparing for the “end of the World” doesn’t mean you are expecting the world to end. It means that you are being prepared for anything.

During World War 2, my grandfather was shot down over occupied France. He then spent a year fighting the Nazi’s alongside the French Underground. Often times in his life he had credited survival skill he had learned in the Boy Scouts for helping him evade capture by Nazi troops.

When Hurricane Charley hit Florida in 2004, it made landfall about 15 miles north of my sisters home. When the storm was over, my sister was left without power or running water for 2 weeks. Roads were closed, and the few grocery stores that were not destroyed in the storm had empty shelves. My sister made it through those weeks because she had a months worth of food stored up in her garage. It wasn’t the “end of the world” but being prepared for the end of the world made getting through that disaster easy.

Every week we some sort of disaster effecting our nation somewhere on TV. Earthquakes out west, tornados in the heartland, blizzards up north, flooding, wild fires, and even riots. These are far from “the End of the World”, but prepping and survival skills will save you in any of these situations. So maybe it is time to realize that preppers actually have the right idea. As my grandfather would have been quick to remind you, the Boy Scout motto is “Be Prepared”.

What You Are Wearing Can Keep You Alive

Seeing the Light - The Best Flashlight for when the SHTF