A Magnificent Dog and My Best Friend – Max

Every dog owner thinks their dog is special and unique and that is true every animal is gifted with its own personality and loyal spirit and is a loved member of the family.

My best friend’s name is Max, he’s a 120 pound Doberman pinscher who like other pets I’ve had has unique qualities and is extremely intelligent and well trained.

Max was a 4 year old when he came into our lives from Doberman Rescue here in Florida. 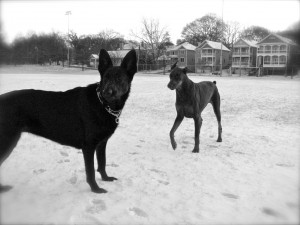 It was a Saturday afternoon when I was shopping at Best Buy and down the way I saw a man walking three Doberman’s into the local Pet Smart retail store. Having a free afternoon and needing to pick up some items for my tiger tabby cat Dante I walk down to Pet Smart and went inside. The man was standing alongside other people each with dogs that were part of a Florida Rescue Association in particular attention for me were the Doberman’s one in particular a large red and rust colored male who when I approached him walked right over to me and wanted to be petted which I did – I think it was love at first sight.

But as things go I had a wife who might not exactly warm up to the idea of a huge unknown dog that was not a cuddly puppy coming into our lives and the lives of our children then 12 and 18. So I called and asked her to drive to Pet Smart and meet this magnificent animal; she agreed and within 30 minutes stood beside me and thus our relationship with Max began.

Sandy was reluctant at first to approach this huge dog but when she walked up with me he went slowly to her side and kind of leaned into her looking up as if asking for attention. Sandy petted this behemoth and knelt down closer to his level and I could see her heart melt. Yep I scored a winner.

The Doberman Rescue handler brought Max to our house to see that the dog would have adequate space to run and get exercise and that we were capable of having such a spirited and independent creature. He explained Dobermans could be a handful and become unruly without knowing what you are doing and keeping their lives consistent and under control. I explained I owned a Doberman 20 years before we met Max named Shogun he was much smaller less than 80 pounds. The Doberman Rescue handler agreed to let us adopt Max and from that day on our lives would never be the same.

Max was kind of nervous pacing around the house sniffing his new surroundings and deciding on a place he would like to lie down. He chose the family room where he must have smelled the most human activity. I had taken a chance and bought a bed for a very large dog and when Max laid down on it he first tramped it down, walked in circles a few times and plopped down deciding he found his sweet spot I assumed.

Our 18 pound tiger tabby was at the pool door wanting to come in and I was nervous about these two meeting and if a claw drawn war would ensue.

Dante came in and immediately froze, Max jumped up and slowly went toward the cat I was tense but Dante merely let Max sniff him then he rolled over on his back and gently pawed at this giant dogs snout as if saying “welcome home – now I have someone to play with when everyone is gone” and a beautiful friendship began. These two were best buddies and would romp and play for a while every day.

When it came time to train Max who wasn’t leash trained on how to walk, sit on command or anything but to come when beckoned we decided on an obedience class would be the best way to train Max and ourselves as new dog owners. We found one through the recommendation of our veterinarian at Cypress Lake Animal Hospital where every Saturday one of the finest animal trainers in the country gave obedience classes for untrained and trained animals.

The following Saturday promptly at 8a we went to our first class finding most of the dogs small and yippee only two large breeds Max and a Golden Retriever who was owned by the teacher’s assistant.

The head instructor looked at Max and commanded we keep him at least 6 feet from all the other animals – just in case Max decided he would have a smaller dog as a snack I guess but he never showed any signs of aggression toward any other animals.

The first class would be the first of many over a two year period where Max was certified as a Companion Dog and then a Working Dog which meant he could follow over 30 commands without flaw and perform a dozen skill sets.

Max was mainly my wife’s constant companion and she doted on him at every occasion. He became the best friend and like having another kid in the family just like Dante. He’d run in the back yard sounding like a horse running the thumping of those big paws drumming the ground as his massive weight and amazing speed ran him in circles till he was exhausted and lay in the grass panting.

Max was one of those rare animals you chance to meet only once in your lives who bonds with your heart and soul so deeply the unconditional love and affection is amazing.

Walking Max was what could be described as extreme exercise and for a man and woman in their 50’s those mile plus jaunts kept us in shape and in the summer heat of Florida soaked us to the bone but the heat never deterred Max he was always ready to go out to play in the yard, a walk on leash or take a ride to the pet store to get treats, or to the outdoor Belltower Mall on Friday’s for Yappy Hour to mix with his other canine friends and meet with their owners.

For a huge animal he had a wonderful disposition even around tiny children who he managed to tolerate as they tried to climb on his back, pull at his ears our give him sloppy wet kisses.

My wife would impress our friends with amazing tricks Max would perform – he was a natural born ham and loved the attention.

Over the years Max enriched our lives and had a profound effect on people my wife took him to visit who were invalids in nursing centers. They loved that such a big dog demonstrated superior intelligence, could entertain large groups with amazing tricks and commands off leash and was so gentle they could cuddle up with this big lovable dog.

Max lived with us for 6 more years after we got him when his big heart just gave out and he passed in his sleep. I can never forget this magnificent animal who returned such love and affection.

He will forever be the best animal friend I ever had.

The Paris Attacks and the Need For Concealed Carry